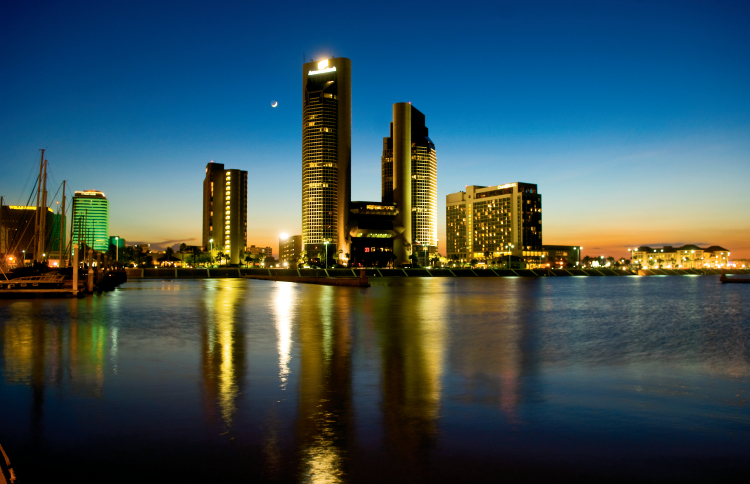 Skyline of the city of Corpus Christi in Texas, U.S.A. Credit: livability.com

U.S.A. – The Corpus Christi City Council has approved a plan to assess the city’s need for an alternative water supply. The plan includes a proposal for the construction of a desalination plant. If everything goes according to schedule, the plant could be operational by the end of 2022, and located along the Corpus Christi Ship Channel or in San Patricio County’s La Quinta corridor.

Before construction can be initiated, the city first needs to receive permits for water rights and discharge from the Texas Commission on Environmental Quality. It is expected that the city will receive its permits in the fall of 2020. Construction is then expected to commence in early 2021 and will take 24 months to complete. The plant is expected to augment the city’s water supply with 38,000 m3/d.[1]

INDIA –  Chennai may soon become home to the first offshore desalination plant in India. If the Deep Ocean Mission gets formal approval, scientists from the National Institute of Ocean Technology (NIOT) will be involved in the construction of the 10,000 m3/d plant, 40 km off the Ennore coast. The offshore plant will be one of the five components of the Deep Ocean Mission and will be a technology demonstrator. The Deep Ocean Mission is India’s mission to explore the deep ocean in an integrated framework similar to the Indian space research organization that has been studying space. The Mission will be led by the Union Earth Sciences Ministry and is expected to commence October this year.[2]

BAHAMAS – Seven Seas Water has extended its contract for the delivery of potable water and wastewater treatment services to the Emerald Bay development in Great Exuma by nine years. Seven Seas Water also announced it will be performing various equipment upgrades for Emerald Bay Development.[3]

NAMIBIA – An industrial engineering professor at the University of Namibia, Frank Kavishe, has advised the government of Namibia to build at least three solar powered desalination plants in order to supply water to the entire country. According to the professor, the country should strongly consider constructing seawater desalination plants along its coastline.  He claimed that these desalination plants (powered by a combination of solar, wind energy, and ocean wave energy) which could supply water to the whole country; would provide the country with a sustainable water source in the face of devastating drought.[4]

SCIENCE – Researchers at the King Abdullah University of Science and Technology (KAUST) have developed a novel way to assess the efficiency of rival desalination technologies and could help guide new desalination developments. Muhammad Shahzad, Muhammad Burhan, and Kim Choon Ng of KAUST’s Water Desalination and Reuse Center explained that existing methods of comparing the energy efficiency of various seawater desalination methods only account for secondary energy consumption—and ignore the type or grade of energy consumed in the process.

The researchers demonstrated a simple thermodynamic approach that accounts for the quantity and quality of energy needed to run a desalination plant. This method produces a common platform for energy efficiency comparisons and uses a standard universal performance ratio that produces more balanced comparisons between seawater desalination methods.[5]