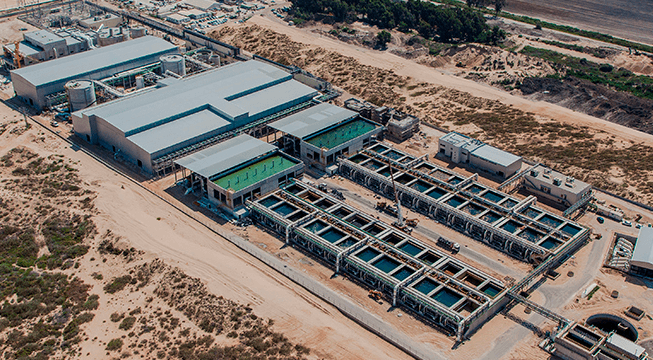 ISRAEL – Energy Minister Yuval Steinitz has revealed that findings of irregularities at the Sorek desalination plant (one of the largest in world) will be investigated by the police. A committee tasked with investigating water quality irregularities at the plant found systematic and continuous violations of chloride concentration limits in the water over a period of more than two years.

The investigation revealed that chloride concentration exceeded limits by 20% and on certain occasions the concentration was four times higher than maximum thresholds. The committee recommended a criminal investigation to identify the parties responsible. The water produced did not pose a health hazard and was within the Israeli Health Ministry’s mandatory water quality standards.[1]

INDIA – L&T Construction, in partnership with UAE-based Tecton Engineering & Construction, is considering investing a total of $1 billion on various desalination and water treatment projects in India. Earlier this year the two firms entered a joint venture to build and operate a 100,000 m3/d plant on behalf of the Gujarat Industrial Development Corporation. The stated aim of the joint venture is to alleviate scarcity of water imports from coastal regions in the south, east, and north-west of India. The firms have not yet confirmed a time-frame for these prospective projects.[2]

ALGERIA – Beni Saf Water Company recently revealed the release of $3 million to expand the capacity of the Beni Saf desalination plant in the wilaya of Aïn Témouchent, in northwest Algeria. The goal is to increase the plant’s capacity by 20,000 m3/d and the project is expected to commence by September 2019 and take nine months to complete. The aim is to reduce the technical shutdown problem and maintain production at 200,000 m3/d year round.[3]

SOUTH AFRICA –   The City of Cape Town has requested the Western Cape Province High Court to dismiss the case launched against it by Quality Filtration Systems (QFS). QFS filed a suit in June, suing the City for an alleged contract breach concerning the V&A Waterfront plant, which the City commissioned it to build in early 2018 during the height of Cape Town’s drought. QFS claimed the city withheld information about sewage contamination of seawater in tender information for building the plant. According to QFS the city didn’t want to pay for the additional costs incurred and also penalized QFS for underproduction because of the dirty feed water.

In response, the City stated that while QFS had written to city officials in May to cancel its contract and to notify its intention to launch legal action, the company failed to write to the municipal manager about this decision. The city argues that this is in contravention of the Legal Proceedings against Certain Organs of State Act and means that the company is therefore barred from taking legal action against the City. The city has asked the court to dismiss QFS’s claim.[4]

BRAZIL – The government of Brazil is progressing with a large-scale desalination scheme in the northeast region of the country. The Programa Agua Doce, the regional development ministry, installed 61 desalination systems in the northeast region in the first 6 months of this year. The units are located in 32 municipalities that supply more than 24,000 people, with forty-eight units in Bahia state, five units in Alagoas state, seven in Piaui and one in Rio Grande do Norte. In total the program has already installed 651 desalination facilities (each capable of supplying 4 m3/d) to various rural communities. The government is planning to invest $62.5 million in the desalination scheme.[5]